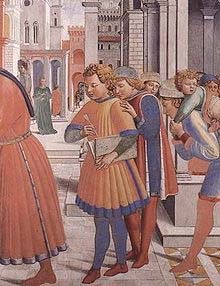 Augustine was born in 354 in the municipium of to Thagaste (now Souk Ahras, Algeria) in Roman Africa. His mother, Monica, was a devout Christian; his father Patricius was a Pagan who converted to Christianity on his deathbed. Scholars believe that Augustine's ancestors included Berbers, Latins, and Phoenicians. He considered himself to be Punic. Augustine's family name, Aurelius, suggests that his father's ancestors were freedmen of the gens Aurelia given full Roman citizenship by the Edict of Caracalla in 212. Augustine's family had been Roman, from a legal standpoint, for at least a century when he was born. It is assumed that his mother, Monica, was of Berber origin, on the basis of her name, but as his family were honestiores, an upper class of citizens known as honorable men, Augustine's first language is likely to have been Latin. At the age of 11, he was sent to school at Madaurus (now M'Daourouch), a small Numidian city about 19 miles south of Thagaste. There he became familiar with Latin literature, as well as pagan beliefs and practices. His first insight into the nature of sin occurred when he and a number of friends stole fruit they did not even want from a neighborhood garden. While at home in 369 and 370, he read Cicero's dialogue Hortensius (now lost), which he described as leaving a lasting impression on him and sparking his interest in philosophy.
At age 17, through the generosity of his fellow citizen Romanianus, Augustine went to Carthage to continue his education in rhetoric. Although raised as a Christian, Augustine left the church to follow the Manichaean religion, much to the despair of his mother, Monica. As a youth Augustine lived a hedonistic lifestyle for a time, associating with young men who boasted of their sexual exploits with women and urged the inexperienced boys, like Augustine, to seek out experiences or to make up stories about experiences in order to gain acceptance and avoid ridicule. It was during this period that he uttered his famous prayer, "Grant me chastity and continence, but not yet." At a young age, he began an affair with a young woman in Carthage. Possibly because his mother wanted him to marry a person of his class, the woman remained his lover for over thirteen years and gave birth to his son Adeodatus, who was viewed as extremely intelligent by his contemporaries. He abandoned her finally on his conversion in 389 when the boy was 17. 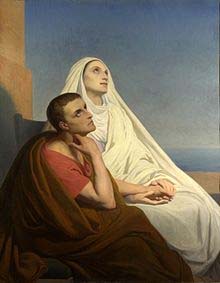 During the years 373 and 374, Augustine taught grammar at Thagaste. The following year he moved to Carthage to conduct a school of rhetoric, and would remain there for the next nine years. Disturbed by the unruly behavior of the students in Carthage, in 383 he moved to establish a school in Rome, where he believed the best and brightest rhetoricians practiced. However, Augustine was disappointed with the Roman schools, where he was met with apathy. Once the time came for his students to pay their fees, they simply fled. Manichaean friends introduced him to the prefect of the City of Rome, Symmachus, who had been asked to provide a professor of rhetoric for the imperial court at Milan.
Augustine won the job and headed north to take up his position in late 384. At the age of thirty, he had won the most visible academic position in the Latin world, at a time when such posts gave ready access to political careers. During this period, although Augustine showed some fervor for Manichaeism, he was never an initiate or "elect", but remained an "auditor", the lowest level in the sect's hierarchy and he became a teacher.
While still at Carthage, he had begun to move away from Manichaeism, in part because of a disappointing meeting with the Manichaean Bishop, Faustus of Mileve, a key exponent of Manichaean theology.In Rome, he is reported to have completely turned away from Manichaeanism, and instead embraced the scepticism of the New Academy movement. At Milan, his mother pressured him to become a Christian. Augustine's own studies in Neoplatonism were also leading him in this direction, and his friend Simplicianus urged him that way as well. But it was the bishop of Milan, Ambrose, who had most influence over Augustine. Like Augustine, Ambrose was a master of rhetoric, but older and more experienced.
Augustine's mother had followed him to Milan and he allowed her to arrange a marriage, for which he abandoned his concubine. It is believed that Augustine truly loved the woman he had lived with for so long and was deeply hurt by ending this relationship. In fact, there is evidence that Augustine may have considered his relationship with the concubine to be equivalent to marriage, though not legally recognized as such. In his Confessions, he admitted that the experience eventually produced a decreased sensitivity to pain over time. He had to wait two years until his fiancée came of age, and he soon took another concubine. Augustine eventually broke off his engagement to his eleven-year-old fiancée, but never renewed his relationship with either of his concubines.
Alypius of Thagaste steered Augustine away from marriage, saying that they could not live a life together in the love of wisdom if he married. Augustine looked back years later on the life at Cassiciacum, a villa outside of Milan where he gathered with his followers, and described it as Christianae vitae otium – the Christian life of leisure. Augustine had been awarded a job of professor of rhetoric in Milan at the time he was living at Cassiciacum around 383.

In the summer of 386, after having heard and been inspired and moved by the story of Placianus's and his friends' first reading of the life of Saint Anthony of the Desert, Augustine converted to Christianity. As Augustine later told it, his conversion was prompted by a childlike voice he heard telling him to "take up and read" (Latin: tolle, lege), which he took as a divine command to open the Bible and read the first thing he saw. Augustine read from Paul's Epistle to the Romans – the so-called "Transformation of Believers" section, consisting of chapters 12 through 15 – wherein Paul outlines how the Gospel transforms believers, and the believers' resulting behaviour. The specific part to which Augustine opened his Bible was Romans chapter 13, verses 13 and 14, to wit:

Not in rioting and drunkenness, not in chambering and wantonness, not in strife and envying, but put on the Lord Jesus Christ, and make no provision for the flesh to fulfill the lusts thereof. He later wrote an account of his conversion – his very transformation, as Paul described – in his Confessions (Latin: Confessiones), which has since become a must-read classic of Christian theology. Ambrose baptized Augustine, along with his son Adeodatus, on Easter Vigil in 387 in Milan. A year later, in 388, Augustine completed his apology On the Holiness of the Catholic Church. That year, also, Adeodatus and Augustine returned to Africa, Augustine's home country, during which trip Augustine's mother Monica died. Upon their arrival, they began a life of aristocratic leisure at Augustine's family's property. Soon after, Adeodatus, too, passed away. Augustine then sold his patrimony and gave the money to the poor. The only thing he kept was the family house, which he converted into a monastic foundation for himself and a group of friends. 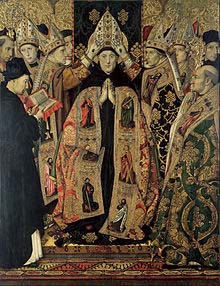 In 391 Augustine was ordained a priest in Hippo Regius (now Annaba), in Algeria. He became a famous preacher (more than 350 preserved sermons are believed to be authentic), and was noted for combating the Manichaean religion, to which he had formerly adhered. In 395 he was made coadjutor Bishop of Hippo, and became full Bishop shortly thereafter, hence the name "Augustine of Hippo"; and he gave his property to the church of Thagaste. He remained in that position until his death in 430.
Augustine worked tirelessly in trying to convince the people of Hippo to convert to Christianity. Though he had left his monastery, he continued to lead a monastic life in the episcopal residence. He left a regula for his monastery that led to his designation as the "patron saint of regular clergy." Much of Augustine's later life was recorded by his friend Possidius, bishop of Calama (present-day Guelma, Algeria), in his Sancti Augustini Vita. Possidius admired Augustine as a man of powerful intellect and a stirring orator who took every opportunity to defend Christianity against its detractors. Possidius also described Augustine's personal traits in detail, drawing a portrait of a man who ate sparingly, worked tirelessly, despised gossip, shunned the temptations of the flesh, and exercised prudence in the financial stewardship of his see.

Shortly before Augustine's death the Vandals, a Germanic tribe that had converted to Arianism, invaded Roman Africa. The Vandals besieged Hippo in the spring of 430, when Augustine entered his final illness. According to Possidius, one of the few miracles attributed to Augustine, the healing of an ill man, took place during the siege.
According to Possidius, Augustine spent his final days in prayer and repentance, requesting that the penitential Psalms of David be hung on his walls so that he could read them. He directed that the library of the church in Hippo and all the books therein should be carefully preserved. He died on 28 August 430. Shortly after his death, the Vandals lifted the siege of Hippo, but they returned not long thereafter and burned the city. They destroyed all of it but Augustine's cathedral and library, which they left untouched.
According to Bede's True Martyrology, Augustine's body was later translated or moved to Cagliari, Sardinia, by the Catholic bishops expelled from North Africa by Huneric. Around 720, his remains were translated again by Peter, bishop of Pavia and uncle of the Lombard king Liutprand, to the church of San Pietro in Ciel d'Oro, in order to save them from frequent coastal raids by Muslims.
In January 1327, Pope John XXII issued the papal bull Veneranda Santorum Patrum, in which he appointed the Augustinians guardians of the tomb of Augustine, which was remade in 1362 and elaborately carved with bas-reliefs of scenes from Augustine's life. By that time, however, the actual remains of Augustine could not be authenticated.
The Augustinians were expelled from Pavia in 1700, taking refuge in Milan with the relics of Augustine, and the disassembled Arca, which were removed to the cathedral there. San Pietro fell into disrepair, but was finally rebuilt in the 1870s, under the urging of Agostino Gaetano Riboldi, and reconsecrated in 1896 when the relics of Augustine and the shrine were once again reinstalled.
Augustine was canonized by popular acclaim, and later recognized as a Doctor of the Church in 1298 by Pope Boniface VIII.[48] His feast day is 28 August, the day on which he died. He is considered the patron saint of brewers, printers, theologians, sore eyes, and a number of cities and dioceses.